Ayodhya is situated on the right bank of the river Ghagra or Saryu. It is just 6 km from Faizabad, Ayodhya is a popular pilgrim centre. This town is closely associated with Lord Rama, the seventh incarnation of Lord Vishnu.


Situated in the center of the town, this temple is approachable by a flight of 76 steps. Legend has it that Hanuman lived here in a cave and guarded the Janambhoomi or Ramkot. The main temple contains the statue of Maa Anjani, with Bal Hanuman seated on her lap. The faithful believe that all their wishes are granted with a visit to this holy shrine.

A massive structure in the shape of a four sided fort with circular bastions at each corner houses a temple of Hanuman and is the most popular shrine in Ayodhya. 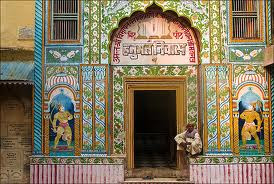 
This has images of Sri Rama and Sita wearing gold crowns. It is also known as Sone-ke-Ghar. 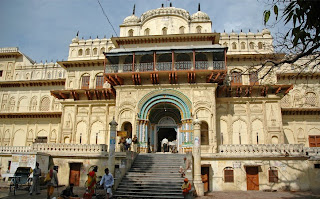 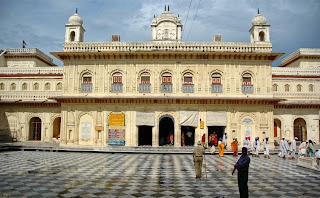 
According to mythology, Lord Rama is said to have been cremated here.


The first of these ancient earth mounds is identified with a stupa built by the Emperor Ashoka, while the second is believed to be an ancient monastery.

This temple stands at the place where Rama is said to have performed the Ashvamedha Yajnya. About 300 years ago the Raja of kulu built a new temple here, which was improved by Ahalyabai Hokar of Indore during 1784, at the same time the adjoining Ghats were also built. The initial idols in black sandstone were recovered from Saryu and placed in the new temple, famous as Kaleram-ka-Mandir. 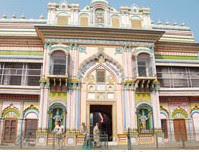 The temple of Nageshwarnath is said to have been established by Kush the son of Rama. Legend has it that Kush lost his armlet, while bathing in the Saryu, which was picked up by a Nag-Kanya, who fell in love with him. As she was a devotee of Shiva, Kush erected this temple for her. It is said that this has been the only temple to have survived till the time of Vikramaditya, the rest of city had fallen into ruins and was covered by dense forests. It was by means of this temple that Vikramaditya was able to locate Ayodhya and the sites of different shrines here. The festival of Shivratri is celebrated here with great pomp and splendor. 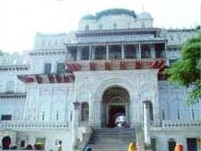 Sita Ki Rasoi is a delightful shrine situated to the north-western corner of the Rama Janmabhoomi, in Ayodhya, Uttar Pradesh. It is the place where Sita cooked the meal for her family, the first time, after her marriage with Lord Ram. The main attraction is the symbolic kitchen utensils seen there. The temple houses the idols of four brothers Ram, Lakshman, Bharat and Shatrughna along with their wives Sita, Urmila, Mandavi, and Srutakirti.

Ramkot, the chief place of worship in Ayodhya is the site of the ancient citadel of Ramkot which stands on an elevated ground in the western part of the city. Although visited by pilgrims throughout the year, this sacred place attracts devotees from all over India and abroad, on `Ram Navami’, the day of Lord’s birth, which is celebrated with great pomp and show, in the Hindu month of Chaitra (March-April).
Ram Katha Sagrahalaya
Ram Katha Sagrahalaya is a museum in Ayodhya. The items on display include palm leaf manuscripts, coins, pottery, sculptures, photographs and terracotta and metal objects. Library facilities are available.

Lakshmana Ghat, on the banks of the Sarayu river, this is where Rama"s brother Lakshman is said to have voluntarily given up his life-an act called samadhi. Another version says that he gave up living after he broke a vow. 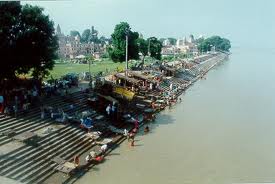 Guptar Ghat is a famous pilgrim spot situated at Ayodhya in Uttar Pradesh. It encloses a sequence of well maintained ghats built by Raja Darshan Singh during first half of the 19th century. "Gupt" means disappearance and it is believed that Lord Ram has left his body at this spot while on his eternal journey. Major points of attractions include Chakra Harji Vishnu Temple, Gupta Harji Temple and Raja Mandir. The Chakra Harji Vishnu Temple houses an idol of Chakra Harji Vishnu, which is very old. There is also an imprint of Sri Ram"s feet here
Birla Temple
An outstanding marble temple, Birla is located in Ayodhya of Uttar Pradesh. It enshrines the images of Lord Ram, Sita and Lakshman.

An outstanding marble temple, Birla is located in Ayodhya of Uttar Pradesh. It enshrines the images of Lord Ram, Sita and Lakshman. 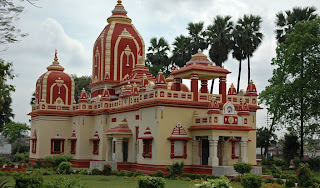 Other places of interest

Naimishararanya is in the Sitapur Dist of U.P. and 89 km away from Lucknow, on the banks of the river Gomati. From Sitapur Cantt one can get to Naimisharanya by train. Bus, autos and taxis are also going there from Lucknow.

Naimisharanya is the Holy forest where Vedavyasa taught the Vedas and all the Puranas to his disciples. Later it is in this very holy place that Romaharshana (alternatively Lomaharshana), Vedavyasa’s disciple, narrated the Puranas to several Rishis. It is also the blessed place where Ugrasrava (Suta Gosvami), the son of Romaharsana, narrated the story of Shreemad Bhagavatam to several Rishis.


According to legend, in the Satya Yuga, the 1st of the four yugas, the Rishis wanted to perform uninterrupted yagyas for the benefit of mankind and asked Lord Brahma for a suitable place. Lord Brahma created a huge wheel (called Manomaya chakra) released it and instructed the sages to follow it. He also told them that the place where it broke down would be very auspicious for doing penance. The sages followed the Manomaya chakra, which after traveling for a long time fell down on a large segment of land and its circumference (Nemi) broke down as predicted by lord Brahma. This segment of land became famous as Naimisharanya. 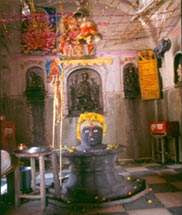 As soon as it got destroyed, from the spot a huge gush of water sprouted up in the form of a Shiva-linga. As the water was flooding the place, the Rishis prayed and Mother Shakti appeared and absorbed and stopped the flow of water. Hence Naimisharanya is also a Shakti Peetha and has a famous ancient Lalita (Devi) temple. She is also called Linga-Dharini Shakti.

There is a huge pond at the place called Chakra-Kunda, meaning the pond of the wheel. 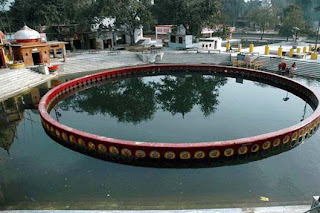 he sages performed a Yagya at that sacred place. This way, the very place sitting where lord Brahma did creations all the sages commenced their Yagya, which continued for ten thousand years. On the completion of Yagya, the deity arrived and blessed them.
Other places of interest are :

Vyasa Peetha where Vedavyasa Taught the Vedas & Puranas.
Dadheechi Kund  associated with Rishi Dadheechi.
Seeta Kund  where Mother earth opened up and took Sita into her fold. (As per her request, after the unification of Lava & Kusha with Lord Rama)

Chitrakoot,"the hills of many wonders" is indeed a gift of nature and the gods. Located in the Banda district of modern Uttar Pradesh(U.P), on the banks of river Paisuni(Mandikini),Chitrakoot is a tranquil retreat on the northern spur of the Vindhyas. Just 6 km south of Karvi and 72 km south east of Banda district on the road to Allahabad, Chitrakoot Dham is one of the most ancient holy pilgrim places of India. Legends have it that it was the abode of Lord Rama, his wife Sita and brother Lakshman for eleven years of their fourteen years of exile. This is also the place,where they came in contact with sage Atri and sati Anasuya.This abode of the gods is credited to have seen the incarnations of Brahma,Vishnu and Mahesh. Chitrakoot ,sacred with the touch of Lord's feet,was where Goswami Tulsidas, the creator of the epic "Shri Ramcharitmanas" spent many years of his life. Dotted with innumerable temples and shrines, nature's splendor here is wrapped in peace and tranquility, permeated only by singing birds and gushing streams.

A forested hill of prime religious significance, this is believed to be the original Chitrakoot. The Bharat Milap Temple is located here. Pilgrims perform a ritual circumambulation of the hill to seek blessings.

This picturesque spot is marked by two immense rocks. It is believed to be the place where Lord Rama and Sita feasted their eyes on the beauty of Chitrakoot. 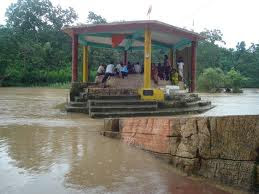 Located on a steep hillside, it is approachable by a flight of 360 steps. Here, the waters of a natural spring cascade over an image of Lord Hanuman. 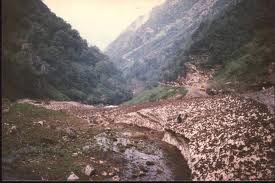 On the banks of the River Mandakini, and center of ritual activity, this Ghat is the most frequented in Chitrakoot. The "Aarti" performed in the evening is particularly beautiful.

An unusual cave over the Mandakini. Said to be the place where Sita bathed.

19 km. This is a tiny rivulet which flows into tanks at the end of an underground cave. The source of this rivulet remains unfathomable. Two natural throne-line rocks in the cave have led to the belief that Lord Rama and his brother Laxman held court here.
Bharat Koop
To attain Salvation, the pilgrimage to Chitrakoot is incomplete without a visit to this hallowed place of worship. It is said that , to crown Lord Rama as the king of Ayodhya, his brother Bharat, collected the waters of all sacred rivers to anoint him with. On the advice of Sage Atri, the waters were later poured into a deep well popularly known as Bharat Koop. A temple dedicated to Lord Rama is also found here.

13 km. It was here that Atri Muni, his wife Anasuya and their three sons meditated. An ashram in Anasuya's name is located here. It is believed that the Mandakini river emerged as a result of Anasuya's meditation. 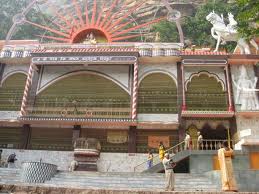 42 km from Chitrakoot, this place is believed to be the birth place of Goswami Tulsidas. A Tulsi Mandir is situated here.

11km. On the Karvi-Devangana road near Bankey Siddhapur village, is located Ganeshbagh, where a richly carved temple, a seven storeyed baoli and ruins of a residential palace still exist. The complex was built by Peshwa Vinayak Rao as a summer retreat and is often referred to as a mini-Khajuraho.

samridhi
Hi...I am Samridhi, a software engineer from Lucknow.I love to meet new people, know about them, travelling new places and making friends.